My dear friend and compatriot, James (http://www.youtube.com/user/jdubya0257
), sent me this in an email! It is priceless! I have asked him to put this in a video for YouTube, which I expect he will do!
This needs to be circulated aplenty to remind our folks of the deceit to which they have been subject, come election day, November 2, 2010!

This is a different perspective from those we usually read

That’s right - I will say it: “THREE CHEERS FOR BARACK OBAMA!”

He destroyed the Clinton Political Machine - Driving a stake thru the heart of Hillary's Presidential aspirations - something no Republican was ever able to do. Remember when a Hillary Presidency scared the daylights out of you!

He killed off the Kennedy Dynasty - No more Kennedy's trolling Washington looking for booze and women wanting rides home. American women and Freedom are safer tonight!

He is destroying the Democratic Party before our eyes!

These are just a handful of the Democrats whose political careers Obama has destroyed! By the end of 2010 dozens more will be!

In December of 2008 the Democrats were on the rise. In the last two election cycles they had picked up 14 senate seats and 52 house seats. The press was touting the death of the Conservative Movement and the Republican Party.

In one year Obama put a stop to all of this and will probably give the house, if not the senate back to the Republicans..

He has completely exposed liberals and progressives for what they are. Every Generation seems to need to relearn the lesson on why they should never actually put liberals in charge.

He is bringing home the lesson very well!

Liberals want to take over the economy - check

Liberals think they know what is best for everyone - check

Liberals aren't happy till they are running YOUR life - check

He has brought more Americans back to conservatism than anyone since Reagan.

In one year he rejuvenated the Conservative movement and brought out to the streets millions of Freedom-Loving Americans.

Name me one other time in your life that you saw your friends and neighbors this interested in taking back America!

In all honesty, one year ago I was more afraid than I had ever been in my life. Not of the economy, but of the direction our country was going. I thought Americans had forgotten what this country was all about. My neighbors, friends, and strangers proved to me that my lack of confidence of the Greatness and Wisdom of the American people was flat out wrong.

When the American People wake up, no smooth-talking teleprompter-reader can fool them!

Again I want to say, “Thank you, Barack Obama!” 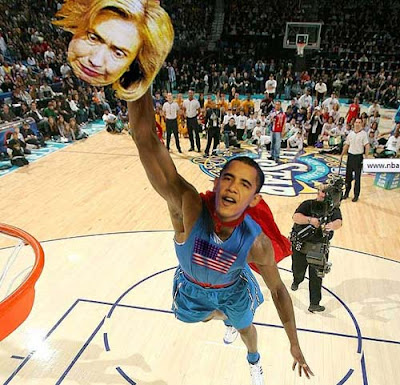 That's a good way to look at it! I never really thought of it that way! I think that Fox News has really played a great part in exposing Obama and the Democrats for what they really are. Can you imagine what is going to happen if Obama tries to use this Nuclear Option and it fails? I sincerely hope that Obama fails in the worse way. I want to see him go right down the toilet along with Reid and Pelosi. Pelosi kills me! She talked about draining the swamp? Well, she needs to jump in the swamp with the rest of the Democrooks like Rangles, Dodd, Patterson, and a few others. What a hypocrite she is! If she had another brain up her butt, she'd die of hemorrhoids! Where do they dig up these space shots? OK,--don't tell me, I know,--Frisco!