Justice for an innocent baby, Antonio West, is needed, NOT for the THUG Tryavon Martin!!

The wicked walk on every side,
when the vilest men are exalted.
Psalm 12:8 (King James Bible)

WHERE IS THE OUTRAGE HERE??? WHERE ARE THE DEMONSTRATIONS REGARDING THE WANTON KILLING OF THIS BABY??? WHY IS NO MENTION OF THIS, OFFERED AS BALANCE TO THE "KILLING" OF THE THUG TRAYVON MARTIN???

Indeed, this was one horrific crime! Not a chance this little baby would make the cover in Rolling Stones, or that there be outrage demonstrated through protests throughout the country!

OH, NO!! "DAMN CREEPY-ASS CRACKERS," meaning whites, don't behave in such a manner!! It is ONLY when it affects blacks, as THEY deem it to affect them, that the outrage is voiced!

Something so very wrong in this equation! 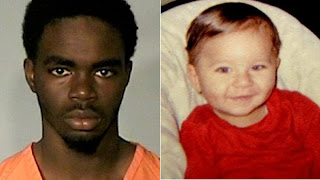 You won't recognize me. My name was Antonio West and I was the 13-month old child who was shot at point blank range by two teens who were attempting to rob my mother, who was also shot. A Grand Jury of my mommy's peers from Brunswick GA determined the teens who murdered me will not face the death penalty...too bad I was given a death sentence for being innocent and defenseless.

My family made the mistake of being white in a 73% non-white neighborhood, but my murder was not ruled a Hate Crime. Nor did President Obama take so much as a single moment to acknowledge my murder.

There is not a white equivalent of Al Sharpton because if there was he would be declared racist, so there is no one rushing to Brunswick GA to demand justice for me. There is no White Panther party to put a bounty on the lives of those who murdered me. I have no voice, I have no representation and unlike those who shot me in the face while I sat innocently in my stroller - I no longer have my life.

So while you are seeking justice for Trayvon, please remember to seek justice for me too. Tell your friends about me, tell you families, get tee shirts with my face on them and make the world pay attention, just like you did for Trayvon.

Posted to CNN  (I would like to know what they will do with it!!)

Labels: Antonio West, is needed, Justice for an innocent baby, NOT for the THUG Tryavon Martin