.
The filthy Muslim brown noser doing what he does best:
give aid and comfort to the enemy! 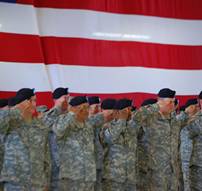 The Obama administration is set to jack up military health insurance premiums by 345% and slash $12.9 billion worth of active duty and retiree Tricare coverage. Yet the very same day, plans were revealed to build a state of the art $750,000 soccer field for the terrorists being held at Guantanamo Bay.

OUR SOLDIERS, SAILORS, AIRMEN AND MARINES NEED OUR HELP RIGHT NOW! – FAX CONGRESS HERE!
Obama's plan is to cut $1.8 billion from Tricare, the military's health insurance and medical system, in the fiscal 2013 budget, and a whopping $12.9 billion by 2017. Administration officials told Congress that the goal of the increased fees is to force military retirees out of military health coverage and instead onto the rolls of the ObamaCare system, including all that goes with it – Death Panels, Independent Payment Advisory Boards, the works.

Meanwhile, Fox News discovered that the administration is currently in the process of building a state of the art $750,000 soccer field for the terrorists held at Guantanamo. The detainees will now have a choice of three recreation centers while they "suffer" through their detainment.
Since when does America put the comfort of terrorists above the needs of the men and women who put their lives on the line every single day to keep us free?

OUR SOLDIERS, SAILORS, AIRMEN AND MARINES NEED OUR HELP RIGHT NOW!
FAX CONGRESS HERE!
Thankfully, some Congressmen are standing strong for our Soldiers, Sailors, Airmen and Marines. "We shouldn't ask our military to pay our bills when we aren't willing to impose a similar hardship on the rest of the population," Rep. "Buck" McKeon, (R-CA), chairman of the House Armed Services Committee. "We can't keep asking those who have given so much to give that much more."
Our military men and women raised their hand and swore an oath to protect us. In return we agreed to take care of them and their families while they fought, bled and suffered for US. Fax Congress now. Tell them NO CUTS TO MILITARY HEALTHCARE!