Mary, the "mediatrix" as per the 'Catechism of the Catholic Church'

.
I am constantly running into one or another "zealous" Roman Catholic, who has the effrontery of denying that which is found, in black and white, in what is called the Catechism of the Catholic Church! 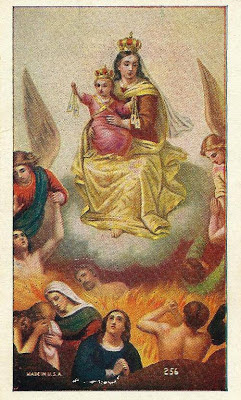 969 "This motherhood of Mary in the order of grace continues uninterruptedly from the consent which she loyally gave at the Annunciation and which she sustained without wavering beneath the cross, until the eternal fulfillment of all the elect. Taken up to heaven she did not lay aside this saving office but by her manifold intercession continues to bring us the gifts of eternal salvation . . . . Therefore the Blessed Virgin is invoked in the Church under the titles of Advocate, Helper, Benefactress, and Mediatrix."512 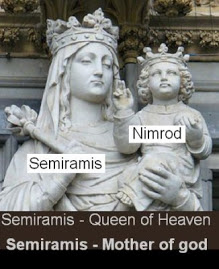 The titles afforded the goddess Semiramis, of the time of Emperor Constantine, and her god son, Nimrod, were simply transferred to Mary and Jesus, when he united the Pagans
and the lukewarm Christians into ONE UNIVERSAL RELIGION.

Now, look in ANY dictionary, and you will find catholic to mean UNIVERSAL!

Here the Catholic Creed, as presented in their Catechism:

I believe in God, the Father almighty,
creator of heaven and earth.


I believe in Jesus Christ, his only Son, our Lord,
who was conceived by the Holy Spirit,
born of the Virgin Mary,
suffered under Pontius Pilate,
was crucified, died, and was buried;
he descended to the dead.
On the third day he rose again;
he ascended into heaven,
he is seated at the right hand of the Father,
and he will come to judge the living and the dead.

I believe in the Holy Spirit,
the holy catholic Church,
the communion of saints,
the forgiveness of sins,
the resurrection of the body,
and the life everlasting.
Amen.

NOTICE THE SMALL "c" in catholic!

It was meant to mean UNIVERSAL!

Labels: Another Jesus, IDOLATRY, Mary, the "mediatrix" as per the 'Catechism of the Catholic Church'