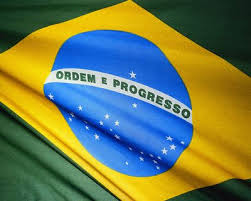 "ORDEM E PROGRESSO" is the very first motto most any school-age child, who may be privileged to go to school, at all, will learn.  Drawing on my childhood memories, having spent 10 of my growing-up years in Brazil, I remember the excellent patriotism instilled through the reverent singing of the anthem to the Brazilian flag:

A verdura sem par destas matas,   -   The matchless verdure
of these forests,
E o esplendor do Cruzeiro do Sul.   -   And the splendor of the
Southern Cross.

Then there was what I deem to be the most beautiful national anthem, which we also sang, everyday at assembly:

This is a most beautifully done video! The lyrics rolling so very perfectly well, to the operatic sounds of this marvelous tune that make for a lump in my throat, for, sadly, these are just words, meaningless words that speak of a valiant beginning for a people who could not live up to the dream once conceived by brave ancestors, for this enormous and bountiful land!

Indeed, "ORDEM E PROGRESSO" to be the remotest virtues to be found within its borders! Terribly sad!

But, while it is things don't go well in Brazil, they never quite have, one never lacks finding criticism directed at the United States of America by its "all knowing" citizenry!  Oh, even those who have never been here know just how horrible things are in this my country!  For, indeed, I am an American!  A proud American!  A grateful American, and I can direct no more than utter disdain for the ignorance of these who presume to slander and defame these my United States of America!

In the next post, I am publishing something I had gotten a few weeks ago, in response to the Newtown massacre, which, quite honestly, surprised me, for it is a "deposition" of a Brazilian who lives in Florida, and who speaks the naked truth!  For, just as she says, she was bombarded with "facts" her compatriots were so kind to share with her regarding this country in which she now resides.  It is quite long, but I will translate one paragraph pertinent to the point I here want to make:

"I was forced to hear how the Americans are all mentally ill, that this is a producer of nuts and what am I doing here where there is no safety?  Do you know what the difference is between this here and what the Brazilians have there? Order."

In a nutshell, no pun intended, this is EXACTLY what the difference is:

Order!  Respect for the law!

A simple thing like crossing the street is taken for granted in any Big Town, USA, for there are stringent laws to deal with traffic, be it pedestrian or vehicular.

Not in Big Town, Brazil!  There, you are not guaranteed you will make it across the lanes in one piece!

After a long absence, having forgotten how haphazardly driving is done in Brazil, I found myself having to be led by the arm by a friend, across a wide viaduct!  At the time, I laughed, but upon reflection, I must ask: how many friends has anyone reading this post lost due to having been run over by a bus, anywhere in the United States?  I have two, who lost their lives for simply being pedestrians crossing the street, in Brazil, and even I was almost run over when there, while "safely" awaiting the changing of the light at a corner, halfway inside the sidewalk.  The bus was making a right turn, I having my back to the street, peering in a store window, when I felt the "swish" on my back by the bus driving over the walkway, leaving tire tracks inches from where I was!  No big deal!  This happens all the time, it seems!

And living haphazardly is what most Brazilians do, most any day of the year!  "Laws" which might be written in the books, so any one city council looks good, are flaunted by businesses, right and left!  Bribes will get these a long way, until... we have the tragedy of a university town, Santa Maria, on the border with Paraguay and Argentina.  I have been there.  The beautifully majestic Iguassu Falls are nearby!

A night club designed to hold 1,000 patrons, had over twice that amount, and some in the band thought it fun to use pyrotechnics, which lit up the foam in the ceiling, and an uncontrollable fire ensued producing a killer toxic smoke!  I cannot begin to imagine the terror of those trying to escape through THE ONLY SMALL EXIT existent, having mistaken a bathroom door for an exit.  Some 50 bodies were found piled up in it, toxic smoke having overcome them!

This club, KISS, had been cited for several safety violations in the past!  It finally delivered the kiss of death to the unthinking crowd!  Fear not!  This is bound to happen again, somewhere else in Brazil!  Brazilians NEVER learn, and are always an avoidable tragedy away waiting to happen!  I would certainly trust not my safety to those in charge of the upcoming Olympics there!

Indeed, order and progress!  There is not a single Brazilian who could EVER soberly define what that means in Brazil, for it has never existed!  Not in our lifetime!