As more Methodist Churches make a mockery of their own founder John Wesley by reading the Koran and reciting Islamic Prayers throughout the U.S., and well known partner of Rick Warren, Methodist leader Leonard Sweet tout Mohammad, the following letter of warning was sent to Pastor Steve Stone and staff members of still another Methodist Church inviting this false religion to conduct services in defiling its sanctuary.  To date, none have repented who received the following warning letter, and their own pastor retaliated, gnashing his teeth at me.  This article also serves as my response to his charges against me. His charges are posted at the end of this article.  This report was sent to his District Superintendent, Dr. Cynthia Davis.  No response!  Here is proof of another Muslim leading congregation in Quran recitation from a Methodist pulpit:

and are on the LIST OF SIGNERS OF
“A CHRISTIAN RESPONSE TO ‘A COMMON WORD BETWEEN US AND YOU’”
[i.e. between CHRISTIANITY AND ISLAM]

The Memphis Conference of the United Methodist Church has profiled Heartsong Church’s collaboration with the Memphis Islamic Center in their article entitled:
“Heartsong Church in Cordova has ‘open doors’ for Muslim neighbors.”
Local and national news stories have shown the welcome 6′ sign on the front lawn of Heartsong Church: 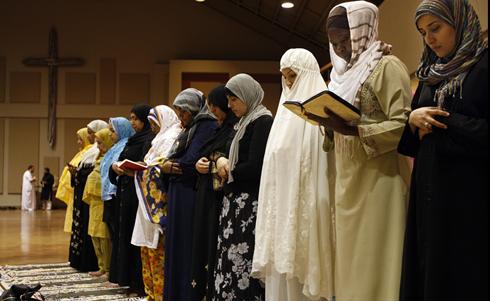 Photo By Nikki Boertman, Associated Press
August 23, 2010, members of the Memphis Islamic Center pray at Heartsong Church in Cordova, a suburb of Memphis, Tennesee at the invitation of its Pastor Steve Stone…One photo speaks a thousands words
In light of what is certainly confusion regarding the teachings in Islam about Jesus, we invite and appeal to you to view the
“Islamic Jesus vs. Biblical Jesus” video comparison now posted at:
http://www.theperfectpeaceplan.com/peacemedia.html
Since Heartsong Church is affiliated with the United Methodist Church, you ought to be aware of founder John Wesley’s published position on Islam:

JOHN WESLEY ON ISLAM:
“Ever since the religion of Islam appeared in the world, the espousers of it…have been as wolves and tigers to all other nations, rending and tearing all that fell into their merciless paws, and grinding them with their iron teeth; that numberless cities are raised from the foundation, and only their name remaining; that many countries, which were once as the garden of God, are now a desolate wilderness; and that so many once numerous and powerful nations are vanished from the earth! Such was, and is at this day, the rage, the fury, the revenge, of these destroyers of human kind.”
The Doctrine of Original Sin, Works (1841), ix. 205.
In the video, there is an explanation of the Jesus discussed in the Koran and Haddith Scriptures, the eschatology or the End Times difference between Islam and Christianity, and what Islamic Jesus says he will do when he returns to the earth. Is Islam a religion of peace? Is the biblical Jesus the same Jesus as depicted in Muslim Scriptures? Is the Islamic Jesus the Prince of Peace, or another masquerade of the Prince of Darkness? This film has been updated to include Rick Warren’s promotion of Islam and awarding Tony Blair with his Global Peace Plan annual award. It includes John Wesley’s published expose of the religion of Islam.  James Sundquist’s presentation was featured on Andy Andersen Live, WMCA Radio in New York, Prime Time Live, Moody Broadcasting Network, “Watchman on the Wall” national radio program, and recommended by Calvary Contender magazine and featuring in his book Rick Warren’s Global Peace Plan vs. Scriptural Teachings on Peace, published by Southwest Radio Church.
QUESTIONS EVERY GOOD BEREAN SHOULD ASK TO TEST THE SPIRITS TO SEE IF THEY BE OF GOD:
1.  Did you ever witness to the leader or members of the Memphis Islamic Center with these Scriptures:

2. Do you know that according to the Apostle John’s own definition, Islam is a false religion and that Mohammad was a false teacher and an antichrist:

3.  If Islam is a false religion, have you obeyed Scripture and been a good watchman on the wall to warn your congregation?
4.  What Scripture…Old or New Testament authorizes you to bring false gods or their rituals into the Sanctuary or Temple?
5.  Are you aware of the Scripture warning of the Apostle John (and he was not being hateful):


” Whosoever transgresseth, and abideth not in the doctrine of Christ, hath not God. He that abideth in the doctrine of Christ, he hath both the Father and the Son.
If there come any unto you, and bring not this doctrine, receive him not into [your] house, neither bid him God speed:
For he that biddeth him God  speed [NIV renders it "he who WELCOMES him"] is partaker of his evil deeds.”  2 John 1:9-11
6. Are you aware of the Doctrine of Separation in these Scriptures (A Wesleyan Methodist Doctrine of Holiness):

In my response to you I left the door open to the possibility you were not passing judgement one me without knowing the truth of what our church did, but you certainly pile on more evidence toward that in your reply.  Of course it will be up to the Lord whether or not you are trying to take God’s role with me.  I won’t dignify your interrogation with responses.  I believe you would only try to use them as weapons of hatefulness against me.  Regretfully, I will leave you to your god of tiny human made religion, and mourn that you are wielding it in the name of Jesus, and joyfully continue to pursue life spent following Jesus-God in flesh and blood who lives in, with and through me by the Holy Spirit. No further correspondence will be welcome or received unless it comes from you in the Spirit of Jesus.  The only thing I have experienced you being sincere about is a haughty and supercilious attack-not anything in anyway that reflects the deep and wide love of the Lord.

*****
DISCLAIMER:  Rock Salt Publishing was founded by author James Sundquist as a volunteer discernment ministry to assist those who have been affected by the abuse of ecclesiastical power or false doctrine.  The contents of all of the emails, articles, blogs, books and broadcasts have been researched very thoroughly and carefully.  Where applicable, both documentation and supportive Scripture references are provided.  It is a very serious matter to bring charges against any organization or individual, and therefore if anyone reading these charges is able to substantiate that they are false, please bring this to our attention.