George Bennett: a simple man, a friend to all! I shall miss you, dearly!

.
There is a breed of men whose passing in this world will never be forgotten, whose aim was to always be helpful, and to count such as a friend is the biggest blessing!

I am privileged to have known one such man, a quiet man, one who listened twice as much as he spoke, whom I never heard say a bad word about anyone: that was George Bennett, my dearest and most beloved neighbor, who died yesterday afternoon.  I was to go see him at ECMC, this afternoon!

As I had written in the card that another neighbor and his close friend, Joe Suttel, came to have me sign, just three days ago, with the news George was in the hospital, I know not how I will survive, without George!  George did everything, mowed my grass, in the summer, and plowed my walkway, in the winter.  When the street plow came by and left an embankment at the end of the walkway that impeded one access the road, he'd come with a shovel to clear it out!

When I broke my arm a couple of years ago, he'd bring a shovel to clean my steps, also.  Now, mind you, he had to walk half a block to get to my house, for he lived at the corner, and I in the middle of the block.  He was an elderly man, and I would scold him for doing too much!  Even with one arm, I could manage clearing out the steps!

One day he knocked on my door, tools in hand, telling me he saw my downspout had been blown away on the side of the house, and if I heard any noises, it was him fixing it!  Of course, he had come prepared, having first gotten a few fasteners to secure the downspout in place!  Then he checked the other downspout, and sought to rivet it, also, and fasten it to the house!  Always attentive to what was needed to be done, that was our beloved George!

A few years back, squirrels took up residence in my beautiful shed, and chewed up the cable on my battery-powered mower: George fixed it, of course!

Thank God, never did I fail to thank him, always remembering him on Thanksgiving, Christmas, and Easter, as well as in-between, when we could sit on his porch steps with his two beloved beautiful, miniature poodles, who are so much fun!  I had just gone to see him the day before Thanksgiving.  He would be going to his daughter's house, Becky's, for the occasion, he told me.  He has a very close-knit family.  One of his girls, Kim, went to school with my son.  I've lived here for the past 32 years, and they have been here even longer.

I just went to his house, where all the kids were, sorting through paperwork.  The eldest upon seeing me said, "Father always talked about you!  He showed us the card you had given him," she said, pointing to the card I had just given him for Thanksgiving, on display atop a table!

They are lost, poor things!  This his death was so very sudden!  They know not what to do with the dogs, each having enough pets, already!  Oh!  I can no longer handle the cleaning up of the yard, otherwise, I would be so very happy to have them! 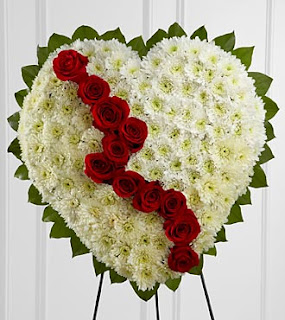 You leave us broken-hearted, my beloved friend and neighbor!
You will be sorely missed, and never to be forgotten!
I pray I see you in heaven!
All my love,

Labels: George Bennett: a simple man a friend to all - I shall miss you dearly