Juan Williams: Race and the Gun Debate on The Wall Street Journal / "Race Ought To Be Inescapable Part of Gun Debate"- Happening Now on FOX

.
What a shame that Juan Williams finds it so very difficult to cross over to the Right!  He is so very logical in so much that he says!

The No. 1 cause of death for African-American men between the ages of 15 and 34: being murdered with a gun.

This week much of the talk about gun control concerns New York Mayor Michael Bloomberg's $12 million ad campaign to put pressure on senators in key states to support legislation that he backs. Or the talk is about the National Rifle Association's pushback against the Bloomberg campaign. Then there was last week's mini-tempest over Senate Majority Leader Harry Reid's decision not to include Sen. Dianne Feinstein's assault-weapon ban in a comprehensive gun-control bill the Senate will take up next month.

One thing you don't hear much about in the discussions of guns: race.
That is an astonishing omission, because race ought to be an inescapable part of the debate. Gun-related violence and murders are concentrated among blacks and Latinos in big cities. Murders with guns are the No. 1 cause of death for African-American men between the ages of 15 and 34. But talking about race in the context of guns would also mean taking on a subject that can't be addressed by passing a law: the family-breakdown issues that lead too many minority children to find social status and power in guns.

The statistics are staggering. In 2009, for example, the Centers for Disease Control reported that 54% of all murders committed, overwhelmingly with guns, are murders of black people. Black people are about 13% of the population.

The dire implications of these numbers is evident in a Children's Defense Fund report that included a chilling historical perspective: The 44,038 black children killed by guns since 1979 (when national data on the age of gun violence victims was first collected) is "nearly 13 times more" than all the black people killed by lynching in the 86-year period of 1882 to 1968.

This awful reality explains why support for gun control in the black and Hispanic community is overwhelming (71% among blacks and 78% of Hispanics, according to a recent Pew poll). That is a marked contrast with national polls on new gun laws. Those polls show 46% of Americans of all races backing the right to own guns versus 50% who agree to the need for more limits on gun owners. Apparently, the heart of opposition to new gun regulations is in the white community. Yet white people face far less daily violence with guns.

The debate over gun control too often seems a matter of abstractions about the meaning of the Constitution and the permissible capacities of ammunition magazines. Why is so little time spent on a question of more immediate concern—namely, why are so many young black people using guns to kill their neighbors?

President Obama, a hero in black America as the first black president, has been remarkably quiet on this issue until recently. It was only in December, after the mass killing of mostly white school children in Newtown, Conn., by a white man, that the president took the political risk of backing new gun-control legislation.

Young blacks' violent deaths from handguns hadn't moved him to such action. The president spoke publicly about that matter only after the recent gun murder of a 15-year-old girl from his hometown of Chicago who had performed at his second inaugural. "Last year there were 443 murders with firearms in this city and 65 were people under 18," Mr. Obama said. "That's the equivalent of a Newtown every four months. This is not just a gun issue. It is also an issue of the communities that we are building." 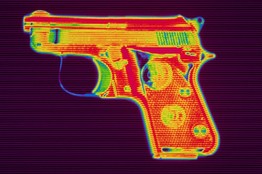 In speaking about social breakdown in those minority communities, the president put the gun issue in the context of high rates of out-of-wedlock births that lead to high rates of childhood poverty. "I wish I had a father who was around and involved," the president said, in words that echoed loudly through black and Latino neighborhoods nationally because he revealed a pain so common, yet so rarely confessed, among young people of color.

The shame and silence is enforced by civil-rights leaders who speak in support of gun control but never about a dysfunctional gangster-rap culture that glorifies promiscuity, drug dealers and the power of the gun.

"Loving, supporting parents . . . [are] the single most important thing," the president told his audience of young, mostly minority children at Hyde Park Academy High School in Chicago. He made the case for parents as the key to giving children a sense of self-esteem beyond the barrel of a gun.

When President Obama tried to speak to this crippling dynamic in 2008, he was basically told to shut up by Rev. Jesse Jackson. The Chicago-based activist said: "Barack was talking down to black people," then he added a vulgar threat about what he wanted to do in response. The moment revealed the high cost of speaking honestly about social breakdown in black America.

I support gun control. But speaking honestly about the combustible mix of race and guns may be more important to stopping the slaughter in minority communities than any new gun-control laws.

Mr. Williams is a political analyst for Fox News and a columnist for the Hill.


A version of this article appeared March 27, 2013, on page A17 in the U.S. edition of The Wall Street Journal, with the headline: Race and the Gun Debate.


Published on Mar 27, 2013 by RightSightings
A VERY compelling interview featuring Juan Williams discussing a vital element that seems to be missing in the national debate on gun control, 'RACE'. FNC's Jon Scott conducts this interview as Williams outlines his most recent column published in the Wall Street Journal, that details his findings on this topic.

Labels: Juan Williams: Race and the Gun Debate on The Wall Street Journal / Race Ought To Be Inescapable Part of Gun Debate- Happening Now on FOX